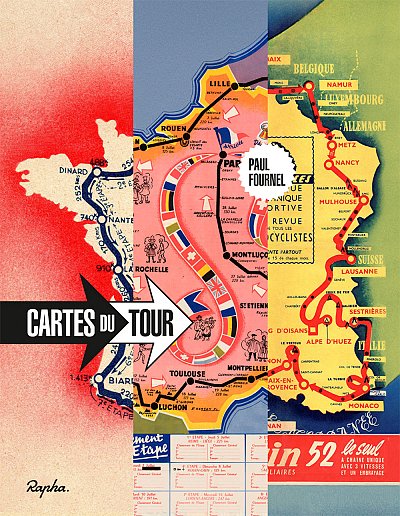 The maps of the Tour tell of the evolution and challenges of the most prestigious bike race in the world. They are always similar and always different. They trace the history of a country which evolves, which reveals itself, which opens itself up to its neighbours and which carves out Europe before Europe. A country which shows its beauty and its charms. Each route is a picnic spot of several thousands of kilometres for millions of supporters, who wouldn't miss their summer meeting with the peloton for the world.

The maps are varied in style and detail and from an extensive archive specially collected and curated. The overall impact is not just a graphic history of the Tour but
with the combination of incisive writing the book weaves a impression of how the Tour has developed during those
magical three weeks in July.

The maps are a graphic device and intended as a point of historical reference for an occasional associated short story. As the maps vary in quality and size, some years feature more strongly than others, the better quality and more significant ones in a fold-out format.

Cartes du Tour has a map for all the 105 editions and ASO, the Tour's owners, have allowed us permission and access to their archive of road books, maps and associated resources in order to cover-off every edition
since it's start in 1903.